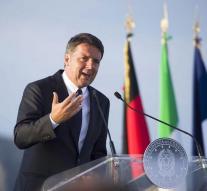 rome - Italian Prime Minister Matteo Renzi traveling Wednesday to the disaster area in central Italy.,, We will be nobody left to his fate- no family, no town or village, 'he promised before his departure to the places that were hit during the night of Tuesday to Wednesday by an earthquake.

,, The first priority now is to dig, 'said Renzi. Countless victims are probably still under the rubble after the quake, which had a magnitude of 6.0, according to the Italian authorities. The prime minister thanked all those who have cleared after natural disasters,, with bare hands 'debris.

Earlier, the government reported that Minister of Infrastructure Graziano Delrio was heading to the area. Renzi followed the situation in the first place from his office in Rome.