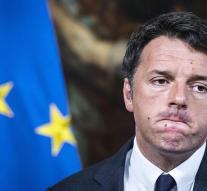 The first exit polls predicted around midnight an overwhelming 'no' as a result of the referendum, which officially goes on constitutional changes. Prime Minister Matteo Renzi was shortly afterwards announced in a speech that he step down.