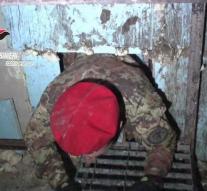 reggio calabria - The Italian police struck a big blow in Tuesday's fight against the mafia. No less than 116 members of more than twenty different clans of the Ndrangheta were arrested in the Calabrian region, reported Italian media. A thousand police officers were involved in the operation and were assisted by helicopters, detective dogs and specialized military units.

According to Italian newspapers, the Mafia organization has hit the heart. Among the detainees are big names of the most powerful mafia families like the Morabito. The 116 Italians are suspected of fraud, extortion, illegal possession of weapons and membership of a mafia organization.

The infamous 'Ndrangheta' is strongly present in the mountainous Calabria and is considered the most powerful of the Italian mafia organizations.

In March, the chief of the Ndrangheta, Santo Vottari, was discovered in a bunkers shelter in Calabria.