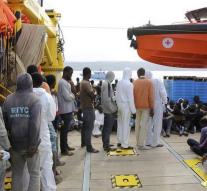 rome - The Italian coast guard said Sunday and Monday in the Mediterranean over a thousand migrants from overcrowded boats have rescued. Also Sixteen bodies were recovered.

Because Turkey has slowed the flow of migrants across its territory to Greece, more people choose the dangerous crossing from North Africa to Italy. On December 1 Italy had already recorded more than 173 000 migrants, more than the record number of 170 000 in 2014. In the past three years are about half a million migrants arrived in Italy.