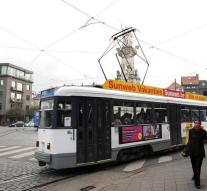 antwerp - A 27-year-old man sat unwell on the back seat of a tram in Antwerp for seven hours while other travelers thought he was sleeping during the rides. According to Belgian media on Friday, surveillance cameras saw how the man got into the tram and sat in an attitude that suggested he was in a deep sleep.

Just after midnight a passenger discovered that something was wrong because the man had a peculiar color. The tram driver alerted the emergency services but the crew of a fire truck that accidentally pulled behind the tram took first. After they had rested him, the man was taken to the hospital.