Home / World / It goes well with the humpback 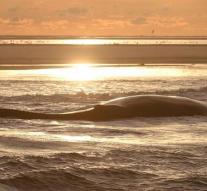 - The humpback whale is no longer threatened with extinction. The global protective measures to ensure the existence of this whale, have borne fruit. Reported that the US National Oceanic and Atmospheric Administration (NOAA), an oceanographic institute.

Humpback whale populations in coastal areas of South America, Madagascar, Alaska, Greenland, Japan and Australia thrive. NOAA investigated fourteen habitat of the whale and found that the populations have grown considerably everywhere. In the seventies worldwide alarm was beaten about the dwindling populations.

Particularly commercial whaling was to blame for the impending extinction of the humpback whale. In 1982 there was a ban on whaling, the humpback has benefited considerably, according to the NOAA.