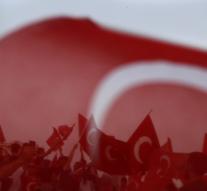 - The Turkish city of Istanbul has suspended a number of city theaters actors as part of an investigation into the failed coup on July 15. It is about famous actors like Sevinç Erbulak, Mahberi Mertoğlu, Irem Arslan and Aydin Arda and directors Ragip and Kemal Yavuz Kocatürk, reported the Turkish newspaper Hurriyet Daily News Wednesday.

Kocatürk, known for his one-man shows like 'Orhan Veli ',' Ahmet Arif 'and' Can Yücel,' the measure announced on social media.,, The reason for the suspension has been communicated orally, but it is very funny, '' he said.

Erbulak was also reported on her account:,, There is only one truth, and that will be revealed one day, '' she added.,, I am put out of my theater where I have a quarter of a century of hard work. Our name is 'actor' since the ancient Greeks. This is what we know and what we do. I hope this mistake will be corrected as soon as possible, '' says Erbulak.