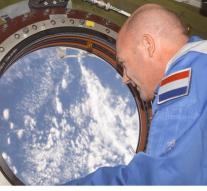 houston - Earths can now also float through ISS International Space Station. The complex has been added to Google Streetview. People can look around in the laboratories and in the lookout point, the Cupola. In addition, they get an explanation of where they are and what happens.

The space station is slightly bigger than a football field, but most of it is occupied by solar panels outside. It is about 400 kilometers above the earth. It is a joint project of Europe, the United States, Russia, Canada and Japan. Astronaut André Kuipers is the only Dutchman who has been there.