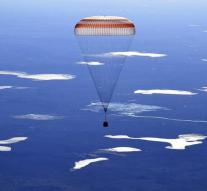 baikonur - Three crewmembers of the International Space Station on Monday after spending 173 days in space returned to Earth, report the Russian and American space services Roskosmos and NASA.

Russian cosmonauts Andrej Borisenko and Sergei Rizjikov and US astronaut Shane Kimbrough landed in a Russian Soyuz capsule in the steppes of Kazakhstan. Led by Kimbrough performed the ISS crew hundreds of scientific experiments.