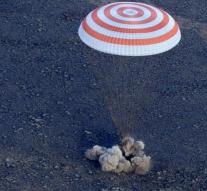 dzheskazgan - They are safely back with both feet on the earthy ground, the American, Russian and Japanese astronauts Saturday night left the International Space Station laboratory after a successful mission. That left NASA TV. A Russian MS-01 Soyuz capsule they pecked at the ISS. The capsule sank Sunday morning (local time) down southeast of the city Dzheskazgan in Kazakhstan.

The astronauts left two Russians and an American astronaut behind which there last Friday arrived.

The leader of the 'alien' team, Anatoly Ivanishin, said: ' It was a very special time. I had no time to monitor events on earth and maybe that's a good thing. On the space you live in a very friendly and good environment. '

In the ISS, the three new astronauts fifty experiments. They remain in the space 155 days. The space laboratory is a project of 15 countries and hovering about 400 kilometers above the Earth.