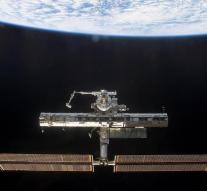 moscow - Russia has again sent a cargo ship to the International Space Station for the first time since the accident in December, an unmanned spacecraft. Progress has scheduled two tons of stock to the station, as did the Russian space agency Roskosmos said Friday.

December was the launch of a Progress spacecraft in failure; six minutes after launch, it crashed through a defect in the launcher.

Wednesday from Baikonur Cosmodrome in Kazakhstan launched Progress had fuel, food, new space suits and a 360 degree camera on board.