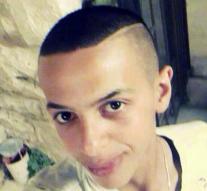 jerusalem - Two 17-year-old Israelis are found guilty of the murder of a Palestinian boy. They had kidnapped him last year in Jerusalem and burned. It would be an act of revenge for the murder of three Israelis. The death of 16-year-old Mohammed Khudair led seven weeks of violence between Israel and the Palestinians.

A punishment is still unknown. The Israeli court suspended judgment on a third suspect and alleged ringleader in, because of an investigation into his mental state.

The charred and battered body of Palestinian boy was found in a forest in West Jerusalem on July 2 last year. That was two days after the bodies of three Israeli teenagers were found on the West Bank. The three were killed by militants from Hamas.