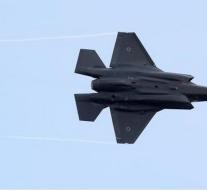 damascus - Israeli fighter aircraft attacked the west of the Syrian city of Hama on Thursday. According to the Syrian army, two people were killed and damage to military installations was done. An Israeli army spokeswoman had no comments on the message.

The Israeli aircraft came through the Lebanese sky for their bombing at Masyaf, which is 40 kilometers west of Hama. According to the Syrian opposition, the target of the attack would be a complex where chemical weapons were also made