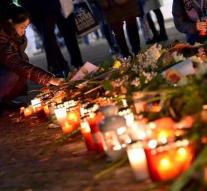 tel aviv - Among the people who were killed by the attack on the Christmas market in Berlin is an Israeli woman. This was announced by the Israeli Ministry of Foreign Affairs.

The woman was with her husband on the market when a terrorist with a truck drove through the crowd which twelve people died and nearly fifty people were injured. The man from the Israeli was seriously injured but is out of danger.

The victims were identified so far, were the Polish driver of the truck and German visitors to the market.