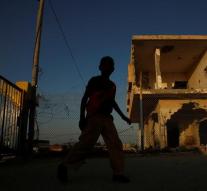 jerusalem - A teenager was shot dead Tuesday at the border between Israel and Egypt. Fifteen-year-old Israeli, according to the newspaper Haaretz went with his father, who was hired to fix a border fence.

The boy would have been shot down by an Egyptian officer who allegedly mistook him for a smuggler. An Israeli army helicopter jerked off to bring the teenager to a hospital, but that was ultimately to no avail.

According to the newspaper according to the first survey that Israel failed to fully inform the Egyptian authorities regarding the work on the fence. The armed forces of both countries investigate.

The father of the victim has told the media angrily lashed out at the Israeli Ministry of Defense. 'The soldiers left us and only came back when she heard shots,' he said. 'And even when she did not respond. '