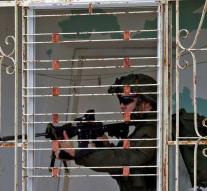 jerusalem - An Israeli soldier has shot a Palestinian man on Monday who wanted to attack a colleague of his with a knife.

That happened on the occupied West Bank, an army spokesman said. The Palestinian Ministry of Health confirmed that the alleged perpetrator was killed, but gave no further details.