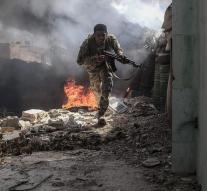 damascus - An Israeli warplane Wednesday would have fired in the vicinity of the Syrian capital Damascus two missiles. The Syrian authorities said the missiles in the Sabouradistrict have fallen. If anything was hit and whether there are victims, was not said.

The attack was an attempt 'to divert attention from the successes of the Syrian Arab army,' said a message from the military leadership in Damascus. As usual, Israel refused to comment on reports of attacks.

The Jerusalem Post, who invoked some Arab media reported that two goals were attacked in Damascus. One would have been a convoy of Hezbollah, which was en route from Damascus to the Lebanese capital Beirut. Hezbollah is a radical anti-Israel Shiite organization. The second goal would have been a military object of an organization loyal to President Assad.