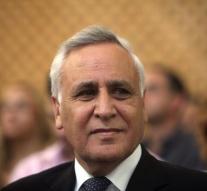 The 71-year-old now has two-thirds of his seven-year prison sentence down on it. Katsav was convicted in 2011 for raping an employee when he was minister in the late nineties and harassing two women during his presidency.

Israeli prosecutors against early release because Katsav has not known its debt, the newspaper Yedioth Ahronoth writes. The religious man has always said he is a victim of a witch hunt. Women's organizations and women parliamentarians have always resisted an early release.