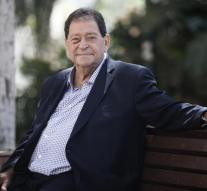 jerusalem - Former Israeli Defense Minister Binyamin Ben-Eliezer on Sunday deceased. The octogenarian Ben-Eliezer was a celebrated army officer, politician and peace negotiator, but was later embroiled in corruption scandals and fell from his pedestal.

The Social Democrat was the first Israeli minister met with Palestinian leader Yasser Arafat. He maintained close ties with the Egyptian President Hosni Mubarak and that would have contributed to the rapprochement between the former sworn enemies Israel and Egypt.

Ben-Eliezer left politics in 2014 because he was struggling with his health. The smell of corruption and nepotism were already stuck with him, and his reputation crumbled just further. He stood up since the adoption last year of bribery, money laundering, fraud and tax evasion, but let in the courtroom absentia relying on his gekwakkel.