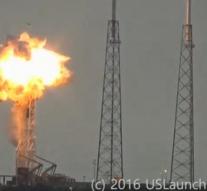 - An Israeli company whose satellite went up in smoke last week when a rocket exploded SpaceX wants the US aerospace company with $ 50 million coming over the bridge, or offer a replacement flight to space.

The rocket exploded Thursday during a test launch at Cape Canaveral in the US state of Florida, a few days before he was to be launched. The Amos-6 satellite from the Israeli SPACECOM would be used by a number of companies, including Facebook. The satellite should provide inter alia for better internet coverage in Africa.

SpaceX, which include flights catered commercial satellites but also brings supplies to the International Space Station, will not go into detail about its contracts with customers or the insurance for the space flights.


The cause of the explosion is still under investigation. It is still unclear how much damage has incurred the base.