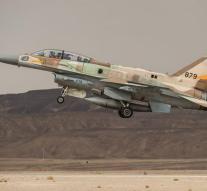 - The Israeli Air Force has trained at a major international exercise in Nevada with pilots of fighters from Pakistan and the United Arab Emirates, traditionally 'enemies'.,, I am not a historian, but this was probably the very first time, '' said the responsible Israeli officer Gil. His country has no diplomatic relations with both Muslim states.

Israel took in the American desert include F-16 fighter jets and tanker aircraft part to maneuver 'Red Flag'. During ten days of testing joint attacks were carried out on fictitious targets. Gil said the cooperation with colleagues from Pakistan and the UAE,, a very positive experience. '

Israel is looking for the last few years cautious rapprochement with the Arab world. Peace treaties with Egypt and Jordan have been closed. Solution to the conflict with the Palestinians is also provided to other countries in Middle East to reach a settlement.