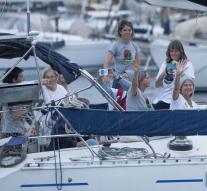 jerusalem - The Israeli guard is about to stop about a ship carrying women activists towards the Gaza Strip and dragging it to the Ashdod port. Israeli media reported Wednesday that 'the armed forces will escort the ship.'

The female crew of the Dutch flag flying Zaytouna Oliva protests with the sea journey to the ten-year siege of the crowded Gaza Strip. On board are certainly thirteen women and two crew members from at least nine different countries. To our knowledge there are no Dutch on board, but a Northern Irish Nobel Laureate (1976) Mairead Maguire.

Israel holds the strip in a stranglehold, especially since 2007, the movement Hamas was in control. The Egyptian government of President Abdel Fattah El-Sisi generally supports the isolation of this narrow coastal strip, where an estimated more than 5,000 people per square kilometer, almost without life sources are packed.

The naval blockade of the Gaza Strip has not yet been broken. In 2010, Israeli commandos attacked a large ship with supplies and activists from Turkey. In addition, nine Turkish passengers were slain.