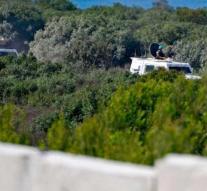 jerusalem - Israel has started a military operation to 'uncover and neutralize' underground tunnels at the border with Lebanon. That has been announced by the Israeli army.

A military spokesman says that a number of tunnels are located that run from Lebanon to Israel and are used to carry out attacks. During the so-called Operation Northern Shield, the army will only operate on Israel's territory and will not cross the border.