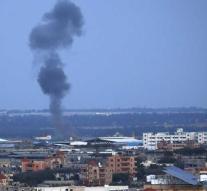 jerusalem - Israel has begun to attack the targets of the Palestinian Hamas movement in the Gaza Strip. It is a retaliation after there was a rocket in the night from Sunday to Monday...

Hamas denies and asserts that it has no interest in the attack. It was suggested that a rocket was unintentionally launched due to bad weather, for example.

Israeli Prime Minister Benjamin Netanyahu does not believe this and said earlier on Monday that his country will react forcefully and that the approaching elections are no obstacle to waging war in the Gaza Strip.