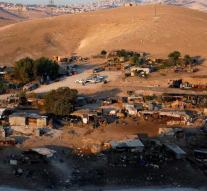 jerusalem - Israel has allowed residents of Bedouin village Khan al-Ahmar to voluntarily dismantle their settlement until October. If this does not happen, then the Israeli authorities themselves take action to remove the buildings.

Israel wants to move the approximately 180 inhabitants of the village on the West Bank to another location. The settlement would have been built without the proper permits. Palestinian activists and several European countries have called on the Israeli authorities to save the village.

For the time being, there is no response to that call. Israeli troops distributed letters on Sunday morning pointing out the deadline for the Bedouin, but not all residents intend to respond. 'We will not vacate this location voluntarily,' said a villager.