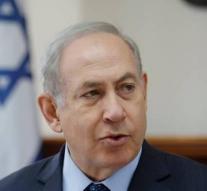 tel aviv - Israel punishes the United Nations because culture organization Unesco has criticized the country. Jerusalem reduces the contribution to the UN by 900,000 euros, so did Prime Minister Benjamin Netanyahu know Wednesday.

The Unesco Executive Board took a proposal from Arab countries about Jerusalem. It criticizes the Israeli 'occupation authorities', among other things because of excavations in eastern Jerusalem.

Israel now pays 2,1 million euro contribution to the UN. That was before 10.8 million euros. From penalties for critical UN resolutions on colonial policy, the country had already reduced this by 7.6 million euros in recent months.