Home / World / Israel is carrying out new attacks in Syria 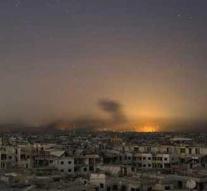 beirut - Israel has again carried out rocket attacks in Syria. The target was an army base south of the capital Damascus. State press agency SANA has shown images of the havoc caused by the missiles. This shows how the fire service tries to extinguish multiple fireplaces.

A commander of a regional unit supporting President Bashar al-Assad reported that nobody was injured. Also two missiles would have been intercepted. According to the Syrian Observatory for Human Rights, however, at least nine fighters of the Syrian regime were killed.

The base according to the observatory would be used by Hezbollah and Iran, allies of Assad, as a weapons depot.