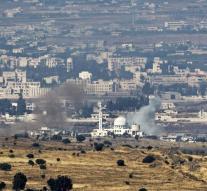 Israel said the area from which the projectiles were shot had been taken to fire. Two Syrian army tanks were therefore disabled. According to Syrian state media, however, a residential building was struck in Quneitra province, causing several civilians to get lost or injured.

The Syrian Observatory of Human Rights, established in Great Britain, reported that rebels in Quneitra had attacked the Syrian army in the vicinity of the city of Baath.