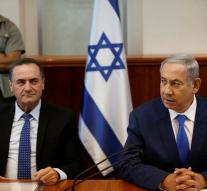 tel aviv - Israel fears Iran will establish multiple army bases in neighboring Syria. Damascus and Tehran are about to make an agreement there, Israeli Minister Yisrael Katz (Information) said at a security conference.

'Syrian President Bashar al-Assad and Iran are striving for the signing of a long-term agreement that will anchor Iran's military presence in Syria,' said Katz. 'It is similar to the agreement signed between Assad and the Russians. '

Moscow, an ally of the Syrian government, currently has an air force base in the Syrian province of Latakia. The Russians may stay there for half a century. According to the Israeli government, Iran is planning to establish a navy port and bases for ground troops and the air force in Syria.

Katz did not say what the source of his information is. The Iranian Ministry of Foreign Affairs did not want to react.