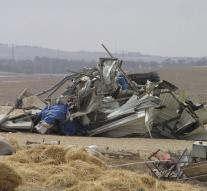 araqib - The Israeli authorities have for the ninetieth time since 2010 bulldozed a Bedouin village in the Negev Desert. The approximately 110 inhabitants of Araqib every time I come back to rebuild their village again, al- Jazeera reported Thursday.

Araqib is one of the forty illegal villages in the southern region. There are an estimated 80 000 Palestinian Bedouin with an Israeli passport. According to the Human Rights Association in Israel they are often no water or electricity, Israel refuses to pick up garbage or educational facilities to set up.