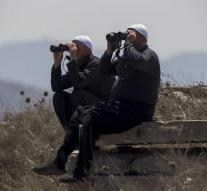 - "Israeli warplanes on Saturday attacked an artillery position in Syria. This was announced by the Israeli army. Earlier in the day hit a grenade from Syria on the Israeli side of the border."

"The grenade was fired during fighting between rtivaliserende groups in Syria and probably ended up accidentally on the wrong side of the border. No one was injured, according to the Israeli army. It is not the first time that this scenario unfolds. Since the beginning of the Syrian civil war, more than five years ago, more shells landed on the occupied Golan Heights by Israel. Even when Israel hit from the air again."