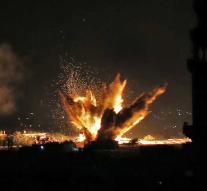 jerusalem - The Israeli army bombed a television station of the Palestinian Hamas movement in the Gaza Strip Monday night. That is what Palestinian administrators and other Palestinian witnesses said. Israel has not confirmed the attack.

Prior to the bombing, Israel would certainly have fired five missiles that could not explode. With that, Israel would have warned the Palestinians to leave the al-Aqsa television studio. It is not known whether there have been casualties.