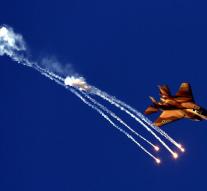 damascus - The Israeli air force has carried out a bombing at Damascus airport. This was reported by the Israeli Channel 2.

The precise target of the bombing was not known. Channel 2 reported on the authority of Syrian sources that it was a party weapons, who had just arrived from Iran. The weaponry would have been meant for the Iranian troops in Syria and Hezbollah.