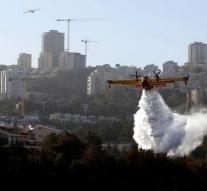 - Israeli police have twelve people arrested in connection with the fires which swept recent days Israel. Which police said Friday.

'We assume that the cases of arson motivated by nationalistic motives,' said police chief Roni Alscheich Thursday. Israeli media speak of a 'vuurintifada 'of Palestinians. Of those arrested are indeed Palestinians, the police have not disclosed. According to Minister of Public Security Gilad Erdan is over lighted half of the fires.

The fires raged in several parts of the country, including in the area of ​​Nazareth and Jerusalem. The largest fire raged in the port city of Haifa. As tens of thousands of people had to be evacuated. Haifa has approximately 270 000 inhabitants and is the third largest city in Israel.