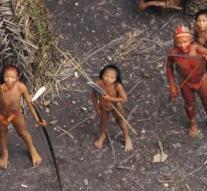 sao paulo - Members of an isolated Indian tribesman in the Amazon area, who some years ago photographed a picture, were supposed to be murdered by a group of gold seekers with whom they came into contact. The Brazilian OM has launched an investigation into the killings of ten Indians, in the Javar Valley- one of the largest indigenous territories in the North American country.

The slaughter party would have taken place last month. Funai, the Brazilian Department of Native Affairs, said that members of the tribe had been rabbit eggs a few weeks ago when they encountered some gold seekers. Then they would be murdered. The perpetrators would then have shot in a cafe about how to cut the bodies into pieces and throw them into the river. The gold seekers claimed that they acted from emergency weather.

Funai has spoken a few witnesses in the town where the bar is located and then filed a complaint with the Brazilian police. In connection with the ongoing investigation into the murders, few details have been released about the murders.

In 2011, Funai released photographs of the tribe who would never have contacted people from outside the rainforest. The images show Indians who have harvested baskets of manioc and papaya in their vegetable gardens. 'It's a group of thirty to forty people near the border with Peru,' said Nellie Werner of Survival International Nederland at the time. 'Probably it's a group that is split off from another tribe. '