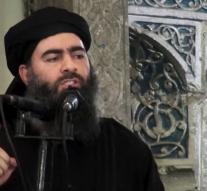 - In a saturday spread message of the spiritual leader of the Islamic State (ISIS), Abu Bakr al-Baghdadi, would be stated that it goes well with the 'caliphate' of al-Baghdadi's movement.

How intensified the war against the motion is passed, the stronger and purer ISIS. He argues that the world is up in arms against ISIS. It is not a crusader war more against us, because the whole world is fighting us now. The motion will be carried out according to the message is not weaker but stronger air attacks including the US, Russia, Syria and other parties.

In the message is spread from ISIS via channels, al-Baghdadi also threatened Israel: With God's help we get closer every day. The Israelis come see us soon in Palestine.

The Israelis thought that we would forget Palestine and that we are distracted, but that is not so. We have not a moment forget Palestine , said al-Baghdadi. It is not known when the recordings were made and why al-Baghadi now starts in Palestine.