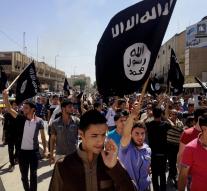 london - About half of the income from Islamic State (ISIS) comes from " taxes " that monitors terrorist organization collects in the population and businesses in the territory they. In total the group has approximately $ 80 million in monthly revenue. According to a new report from IHS Conflict Monitor on Iraq and Syria.

Perhaps unexpectedly shows the illegal oil trade is not the main source of income for the terrorists. While oil contributes about 43 percent to sales, supplies the load of people and companies as much as 50 percent of all revenue.

The report notes that the total income from at least six sources: tax on all business activities in the areas held by ISIS, extraction and trading of oil, land expropriation and confiscation of property in antiekhandel and drugs, criminal activities (kidnapping and bank robbery) and running their own businesses (transport, real estate).