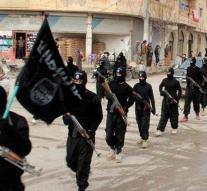 london - The caliphate of Islamic State (ISIS) in the past year quite shrunk. The area that the extremists have held in Syria and Iraq, about 12,800 square kilometers less, according to defense experts of the British IHS Jane's Terrorism and Rebellion Centre (JTIC).

The militants have currently about 78 000 square kilometers in the hands and that is about 14 percent less than in early 2015. In Syria lost ground to the extremists mostly Kurdish fighters. In Iraq, the terrorists were, among others chased out of the city of Tikrit, and they lost control of key oil fields.

The Iraqi army began an offensive on Tuesday to Ramadi city on ISIS to recover well. This was reported by the spokesman of Iraqi special forces. ISIS was Ramadi, 100 kilometers west of Baghdad and the capital of Anbar province, in May in hands. The Iraqi army called in Ramadi on Sunday anyone within 72 hours to leave the city.