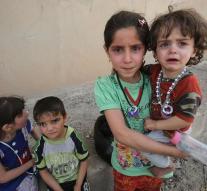 mosul - More than five million children in Iraq urgently need help. In Mosul, IS warriors would attack targeted children. Thus, Islamic State wants to punish their families and force to stay in the Iraqi city, according to UNICEF, the United Nations Children's Fund.

In 2014 Mosul was conquered by IS. Since then, a thousand children have been killed and 1,100 injured.