Home / World / Is this the most bizarre metro station in the world? 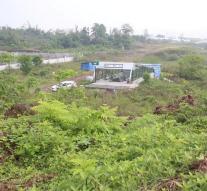 chongqing - Public transport in Chinese in the fast-growing million city of Chongqing. A subway station is erected in the middle of the deserted desert. Bizarre images of the scene already violated WeChat, the Chinese version of WhatsApp.

Chinese call the subway station one of the strangest places in their huge country. In the wide area there are only forests and bushes and a single house.

Caojiawan Station opened in October 2015, but has hardly been able to greet travelers. The station has three entrances, but two of them are overgrown by grass and plants. In the depths, however, a modern hub is hidden to travel with line 6 to downtown Chongqing. In the giant city, more than 30 million people live.

'We see rarely travelers here,' says a staff member at the Chongqing Morning Post station. The city council seems to be very excited about the construction of the station in a brand new city district. Also, there would be a modern connecting road, but for now, commuters must go home across mudflats.

By the way, this is not the only remarkable station in Chongqing. Elsewhere in the city, the subways pass through a flat building.