Home / World / IS strengthened grip on village under Mosul 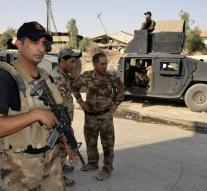 tikrit - Islamic state may have been expelled from Mosul, the terrorist movement has stepped up the Iraqi village of Imam Gharbi, 70 kilometers south of Mosul. The militants infiltrated the village last week, when IS saw the Iraqi army in Mosul, but the city was not reinvested. Most of the warriors who escaped from Mosul sought refuge in the siege village.

In the meantime, the terrorist group has taken 75 percent of Imam Gharbi, an Iraqi army spokesman announced on Tuesday.

Mosul, once a major IS-bulwark, was captured on Sunday after a full eight-month operation. An approximately 100,000 man-made coalition of Iraqi army units, Kurdish warriors and Shiite militia opened in October last year the attack on IS positions in the city.