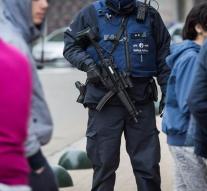 brussels - Terrorist organization Islamic State recruits in Belgium teenagers not to fight in Syria, but to carry out attacks in their own country.

In more and more cases involve underage suspects approached by the terrorists, Belgian media report. They are easy prey because they are influenced and controlled enough by their environment. 'And if they do get caught, it's hard to penalizing minors,' said a spokesman at De Standaard justice.

Through social media, youth are brainwashed according to justice. Especially messaging app Telegram is then used. Then they are encouraged to take action or to persuade other people to do that. They would then have to do domestically.

In recent months, were recruited a dozen minors, according to justice. How many there were previously unknown. Besides boys are also recruited girls.

One of the radicalized youth had contact with the French IS ringleader Rashid Kasim.