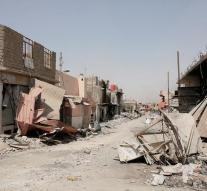 mosul - Islamic State has carried out a surprise attack on a village south of Mosul. IS warriors infiltrated the village of Imam Gharbi Wednesday evening from an area still in the hands of the terrorist organization, sources said in the security services Friday. There is nothing known about the death toll.

Iraqi security forces went to the counter attack on Friday. Two journalists dropped reports of the battle at the village, which is about 70 kilometers south of Mosul. Two other reporters were injured.

By fighting in the area, six water trucks could not reach two refugee camps on Thursday, the International Organization for Migration (IOM) reported. 'This means that less water is available to residents of those locations,' said the IOM. Nearly 80,000 refugees are captured in the camps.