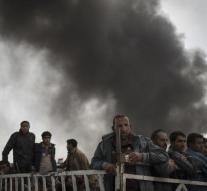 mosul - Sunni extremists of the Islamic State (IS) appear to have no hope to preserve the Iraqi city of Mosul. According to the terrorist movement began Tuesday reports of Iraqi news Iraqinews evacuate their wounded from hospitals in the city. According to sources of news in the night of Monday to Tuesday dozens injured in buses to an unknown destination discharged.

The news site also reported that the IS propaganda earlier this week suddenly no longer intact across Mosul as 'capital of the caliphate' of IS. It would also places where IS keeps people close prisoner. A commentary in the media suggested that IS does not mean the end of the battle the fall of Mosul.