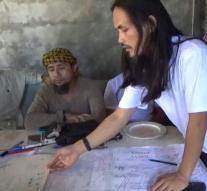 manila - The Philippine army has killed two leaders of an Israeli-based rebel group. The Minister of Defense declared Monday that Omar Maute and Isnilon Hapilon came across fights in the city of Marawi, in the south of the Philippines.

Omar Maute was one of the 'Maute Brothers' who lead the rebel group named after them. The three-year-old Maute group would consist of jihadists from other Islamic Islamic movements on the island, supplemented with foreigners. In 2015, the Maute group called itself 'ISD' of IS. Hapilon was the 'emir' of IS in the Southeast Asia region. The army is still looking for another rebel leader, Mahmud Ahmad.

The jihadists have been fighting in the southern province of Mindanao for months with the Philippine government army.