Home / World / IS leader was in Abu Ghraib prison 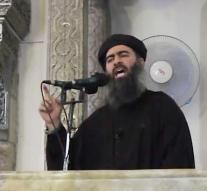 baghdad - Abu Bakr al-Baghdadi, the leader of the terrorist group Islamic State in 2004 was in the notorious Abu Ghraib prison. That the US military confirmed to the US research site the intercept. That Baghdadi was captured by the Americans during the occupation of Iraq was already known, but it was thought until now that he was at Camp Bucca, in southern Iraq.

The IS-leader was not under his own name, Ibrahim Awad Ibrahim al-Badri, registered, but under a number, said a spokesman for the US military. According to the intercept, he spent eight months in Abu Ghraib, and he was only in October 2004, two months before his release, was transferred to Camp Bucca.

Abu Ghraib became notorious in 2004 after pictures emerged of abuse and humiliation of prisoners by a group of American soldiers.