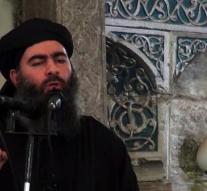 aleppo - Abu Bakr al-Baghdadi, the leader of the terrorist group Islamic State in Iraq would be poisoned by eating deliberately contaminated food. Al-Baghdadi would be in bad shape.

The IS-IS-leader and three other leaders were ill after they had eaten meals in the Iraqi city of Mosul. That says a source at the Iraqi news agency WAA. IS has opened a manhunt for those responsible for the poisoning.

The IS-leader has been transferred to an unknown location.