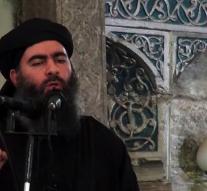 baghdad - In an audio message is Abu Bakr al-Baghdadi, the spiritual leader of Islamic State (IS), the people and calling around the Iraqi city of Mosul Thursday to fight against the 'enemies of God.' He also asked to point to suicide terrorists destruction in the lands of the infidels.

It is the first audio message from the leader of the self-proclaimed caliphate since Iraqi forces backed by the US have launched an offensive to retake Mosul. In a monologue of 31 minutes late Al-Baghdadi managed to keep confidence in victory. 'These (..) Total war and holy war presently Islamic State uitvecht, support us in our faith and is a precursor of victory. '

In addition, the spiritual leader IS fighters called on Turkey to invade. The soldiers must abandon 'the fire of their anger' on the Turkish troops fighting in Syria and should then continue the fight in Turkey. Also in Saudi Arabia, the followers of the IS-leader commit assault after assault on security forces, government and members of the royal family 'because the country league with the infidel nations in the struggle against Islam and Sunni Muslims in Iraq and Syria. '

According to Al-Baghdadi caliphate is not weakened by the death of some senior commanders as Abu Muhammad al-Adnani and Abu Muhammad al-Furqan. Both were slain by air strikes from the US earlier this year.