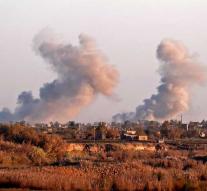 The victims belonged to the 1350 civilians and fighters who held IS in the area near the border with Iraq.

IS still has a dwindling country in the east of the river Euphrates near Hajin. The Observatory reported last week that that city had been recaptured by fighters of the Syrian Democratic Forces (SDF).

In the area, at least five thousand IS fighters would still be active, including many foreigners who want to fight to the death.