Home / World / IS is the city of Deir al-Zor 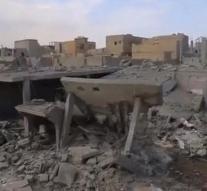 beirut - Islamic state combat units have attacked the Eastern Syrian city Deir al-Zor on Sunday night with a heavy gun. According to the Syrian Observatory for Human Rights, at least seven inhabitants were killed. The bombings went on monday.

IS has been serving in most of the province of Deir al-Zor for two years, but the same city and the nearby airport are in the hands of the government forces of President Bashar al-Assad. The Syrian Air Force regularly sheds out auxiliaries with Russian support over the surrounding area, where about 200,000 people live. There is a lack of food and medicine.